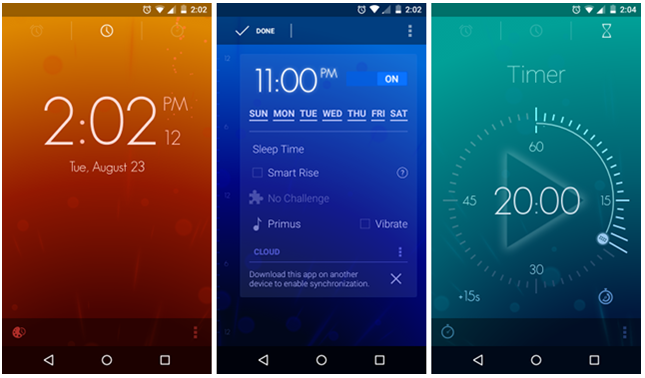 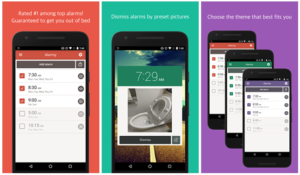 On top of a clean and minimal interface, its most notable feature is the “Photo Mode” alarm — you take a photo of a location of your choice, then when your alarm goes off you must take a photo of that location in order to shut it off. So simple, yet effective! 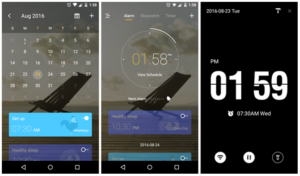 If you’ve used Android for any period of time, you’ve inevitably run into a GO app at some point. The GO Team makes so many apps of all different kinds that it’s almost impossible to escape them — and the thing is, most of their apps are fantastic.

And such is the case with GO Clock. This app is both beautiful and functional, packed with features that most other alarm clock apps don’t have: a built-in calendar, health-based reminders, and a bedside clock display.

I used this app for many months before moving onto something more lightweight. As it turned out, Alarm Clock Xtreme was a bit too advanced for me — not in the sense that it was hard to use, but rather I just never used the features that make it so great. 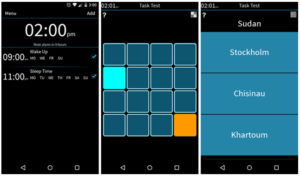 This sleep-focused alarm clock is designed specifically for people who can’t seem to get up in the morning no matter what kinds of tricks they use. If you’re at wit’s end, this may be the app that finally solves your waking-up problem. 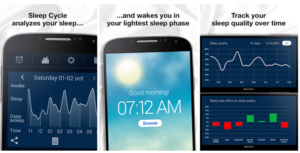 This app was one of the first to popularize the concept of a mobile app that analyzes your sleep behavior. All you have to do is sleep with it next to you on the bed. Sleep behavior is tracked using your phone’s accelerometer.

Once it gets to know you, Sleep Cycle can know when you’re in the lightest phase of sleep and wake up you then, which minimizes grogginess and makes you feel well-rested and relaxed. You can set a custom wake window that Sleep Cycle will try to stay within.

Other features include sleep notes (to see how things like coffee affect your sleep) and in-depth graphs and statistics. 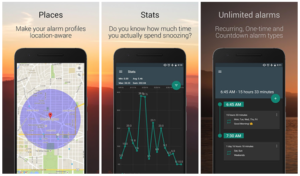 I’m a huge fan of AMdroid‘s soft and pleasing interface design and even more impressed by how flexible its settings and options are. It has a number of helpful features like wake up challenges, customizable alarm profiles, and optional auto-disable of alarms on public holidays.

But I think the coolest feature is that you can make your alarms aware of your location — no more stray exercise alarms going off when you’re out at a party, for example. Another interesting feature is that it tracks how much time you spend snoozing. 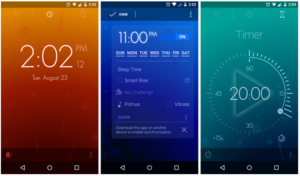 A few years ago, we extolled Timely for being both slick and powerful. Not much has changed since then. It’s still beautiful, looks great even on tablets, is packed full of features, and now is completely free thanks to Google having bought it.

Admittedly, the aesthetics of Timely are somewhat polarizing. It looks like no other alarm clock app I’ve ever seen — which means some people will absolutely love it while others will be appalled.

Other than that, it has the core features that you’d expect in an alarm clock app, plus a few extra ones like wake up challenges, cloud synchronization across devices, and integration with Google Now. 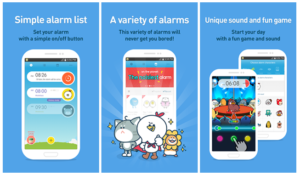 While AlarmMon is huge in South Korea, it hasn’t gained much traction here in the United States. Maybe its design is too “cutesy” for most of us, but if you can look past that, you’ll see that this app is a solid option.

It has six different alarm types, including one called Idol Band, which involves real voices from South Korean celebrities. Alarms can show the day’s weather forecast, and the app records alarm history to help track your wake-up habits. 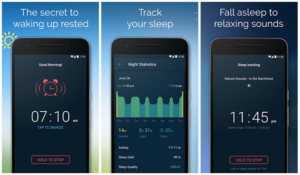 It promises to help you unlock the secret to waking up energized and refreshed, which is important for starting the day off right. Like Sleep Cycle, Good Morning tracks your sleep behavior and wakes you up when you’re in the lightest phase of sleep.

Another nice aspect is that it comes equipped with relaxation sounds and white noise, so using this app can help you fall asleep in addition to helping you wake up on time. It also has sleep goals, which are meant to improve your sleeping habits over time. 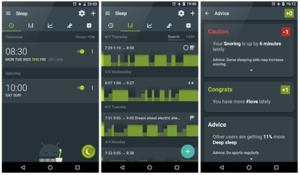 Even though its rating on the Play Store could be higher, Sleep as Android is arguably the most advanced alarm clock app currently available, making it a strong choice for power users and customization freaks.