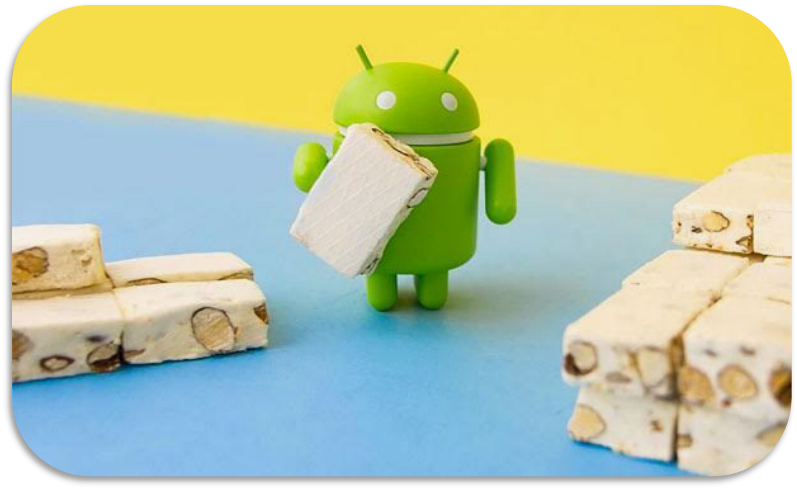 Android Nougat is here and it’s a thing of beauty. It may not have the same dramatic visual overhaul we were first treated to an Android Lollipop two versions ago, but Nougat provides a lot of major improvements and refinements over Marshmallow, along with quite a few nice new usability changes.
Android 7.0–7.1.1 “Nougat” is the seventh major version of the Android operating system. First released as a beta build on March 9, 2016,[5] it was officially released on August 22, 2016, with Nexus devices being the first to receive the update, though the LG V20 was the first new Smartphone released with Nougat.
Nougat introduces notable changes to the operating system and its development platform, including the ability to display multiple apps on-screen at once in a split-screen view, support for inline replies to notifications, as well as an Opened-based Java environment and support for the Vulcan graphics rendering API, and “seamless” system updates on supported devices.

Key Features of Android Nougat
Night mode
If you’re regularly using your phone in the evening, Night mode on Android 7.1 could come in handy. This simple feature adjusts the color of your screen and reduces the amount of blue light you’re exposed to. In theory, that means you’re less likely to negatively impact your sleeping patterns. It’s said to reduce eyestrain, too.
Daydream VR support
After showing off the Pixel for the first time earlier in the year, Google went on to reveal Daydream VR – its new virtual reality platform. Google’s Pixel phones support Daydream VR out of the box, but Android 7.1 adds support to other Google phones. The Daydream View headset works best with the new tech, and the wearable comes with its own controller.

App shortcuts
Just like 3D Touch on icons, if you tap and hold an icon on your Android’s home screen, some additional options will pop up. This saves you a little bit of time because it means you can interact with your apps without always opening them fully. A small but handy addition to Android 7.1.

Moves – control your phone with gestures
Customizing your Android is easier than ever. A new Moves menu lets you assign gestures to commands. You can tell your phone to open the Camera app when you press the power button twice, for example. You can also toggle a setting that will show your most recent notifications automatically when you lift your phone up off your desk.

The best Android N features
Devices with the original Android Nougat installed still have plenty of tricks up their sleeve. Here’s a collection of our favorites.
Split your screen in two
One of the headline features of Android Nougat is multi-window support. This lets you split your screen in two and use two apps at the same time, so you can watch a YouTube video and text a friend at the same time. The feature works in portrait or landscape mode.

Block unwanted calls
Google has taken steps to improve call blocking on Android Nougat. The security software is now built right into the system without the need of a third-party app. If you’re switching to a new device and want to take your list of blocked contacts with you, it’s possible to backup and restores this information with Android Nougat.
Battery life improvements
Android’s Doze mode arrived with Android Marshmallow – the 2015 update. It’s designed to turn off background processes every time the screen is off to prolong battery life. With Android Nougat, your device drops into lower power usage even when it’s being moved around – such as when it’s in your pocket but not being used. As a result, you should have more precious phone usage time before you need to scramble around for your charger.

Windows or Android? Which one is preferable ?