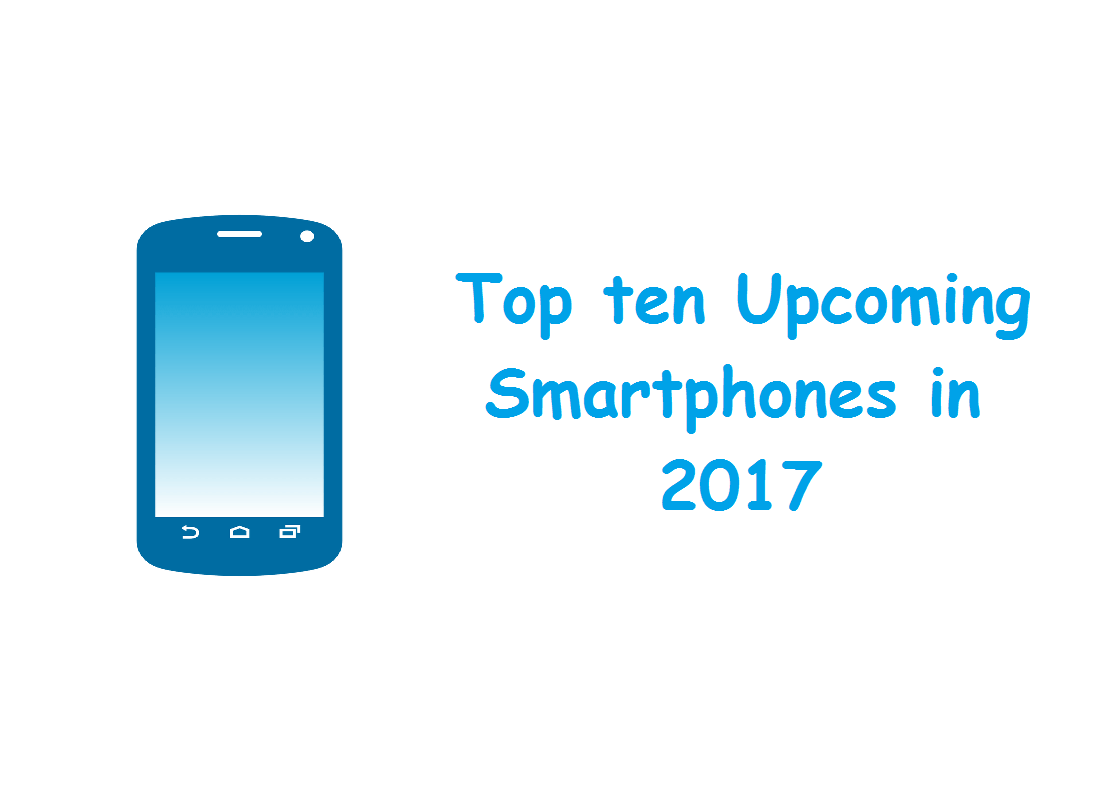 The smartphone market is in a frenzy and phone companies are launching new handsets almost every alternate day. When you go to buy a new phone you obviously part with a chunk of your money and want to get the best deal at that price. Correct me if I am wrong? The upcoming smartphones in 2017 are expected to grab good market share with impressive quality, attractive looks, and superior technology.

So according to the Wall Street Journal, Apple is probably launching its next flagship iPhone 8 with a curved screen that extends to the edges. Rumor has it that the display will be made of OLED technology that will cost more. It will have greater resolution than the iPhone 7 and 7 Plus. A Barclays Research note is also of the same opinion. OLED screens might not look that different but it has better color reproduction and improved contrast.

Also, if 2016’s iPhone 7 did not appeal to you because of its lack of a headphone jack, there is a surprise for you all. It is not coming back. It is gone forever. We should get over it.

Samsung is trying to launch its S8 as soon as possible after the explosion issues with Galaxy Note 7.  It is going to come with a processor Snapdragon 835 SoC, the first smartphone to feature this version of Snapdragon. The device will come in two variants 5.8-inch display and the 6.2-inch display. It can feature both Snapdragon 835 SoC and Exynos chipset. The camera will have some update from the current one in Galaxy S7 Edge. It might also feature an Iris Scanner on the front. The Indian version will most likely launch with the Exynos processor.

Wonderful design and performance have made OnePlus3 a huge hit with tech geeks and normal smartphone users alike. Like the previous versions, OnePlus 4 also aims to sway users with high-end hardware at a mid-range price. It is expected to get released mid-2017. OnePlus 4 cameras and OnePlus 4 battery are hopefully what they are going to be focusing on. OnePlus 3 had a high megapixel count (12mp for the front and 8mp front) but still, the camera performance was not as high as expected. Hopefully, OnePlus 4 will come with a finer camera.

OnePlus 3 battery was a 3000 mAh juicer pack, a lower in size than that of its predecessors. It can barely see a whole day through with moderate usage. The device should improve on its battery and on priority.

The Find brand has always been Oppo’s flagship brand. According to leak experts, Oppo will be launching it is Oppo Find 9 in the 1st quarter of 2017. It will be jumping a generation because the last version was called Oppo Find 7. It will bring with it Snapdragon 835 processor and Android Nougat 7.1 Operating System. Some leaks say that it will come with another processor version Qualcomm 653. Oppo Find 9 boasts of a 21mp snapper on the rear and 8mp front facing shooter.

ALSO READ  HOW TO CHANGE MAC ADDRESS IN ANDROID DEVICE

Mi 5 has enjoyed a good response from handset users and it is expected to release its next model Mi 6 very soon. Some leaks, though very few, say that it is going to come with some new inventiveness. Dates and specifications are not yet known but when it is going to launch, it would definitely be one of the most praised devices.

Since HTC 10 was not well received by users, HTC is relying highly on its next model HTC 11. HTC has always been very unique with their designs. It is not yet heard to be packing any new surprises in it HTC 11 model. Hopefully, users will receive the phone well and give it the commendation it deserves.

It is needless to say that it is one of the most awaited smartphones in the Note series. Features would not differ much from the Note 7 model. However, I feel that it is too early on their part to launch the Note 8 model. People have just begun to know of Note 7 and has been receiving well. Maybe their rationale lies somewhere else.

The Japanese tech giant may revamp the current design and launch Xperia Z6. It will probably release the new model with a screen of 5.2 or 5.3 inches Triluminos LED Display with 2K resolution. However, the Compact version of Z6 may come with a 4.8 inches display with FHD resolution. In this flagship, we may see very thin bezels to increase screen to body ratio.

This device might get launched in the 2nd quarter of 2017. Ever since Microsoft has stopped making its Lumia devices, ‘Surface Smartphone’ has been its new brainchild. Microsoft has been under great pressure to crack the mobile market successfully. Therefore the aim is to launch a perfect smartphone that can convert the iOS users and the Android users to Windows. Microsoft CEO Satya Nadella doesn’t shy away from calling this device the ‘ultimate mobile device’.

LG G5 was launched recently with the modular design but handset users did not show much warmth to the new entrant. The company is trying to make a comeback with LG G6. This time they are probably giving up on the modular things and are not taking any risk in this competitive market. They are working hard to produce a device that is special and also affordable to its customers.

I hope this list has been broadly exhaustive. Some might differ with me in the rankings but all in all these 10 devices are the ones to look out for in 2017.