Difference between Android Kitkat and Lollipop 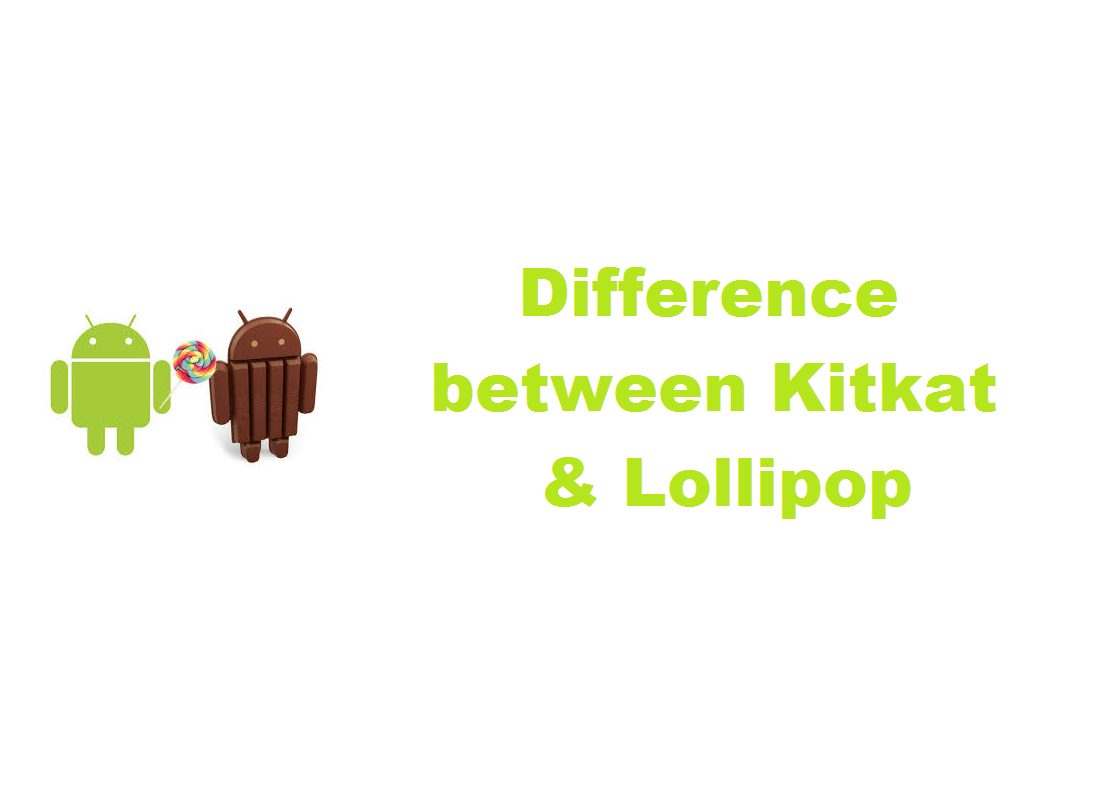 Android is a software stack that includes an operating system, middleware, and key applications. While Google is the main factor which comes to mind, the Open Handset Alliance also collaborates on Android’s development and release. The operating system is based on the Linux kernel, the specific versions depend on the platform version and are given in the comparison table below.

Android Lollipop has taken over from Android Kit Kat.

The platform has gone through several major revamps since its first baby steps, but to date, Android Lollipop (version 5.0) has by far been the most significant. By the time Lollipop rocked up Android had been around for a while and could boast a vast content, app, and game library via Google Play backed up by legions of developers. Lollipop saw that entire block of heritage gets a fresh new face; Material Design, an entirely new aesthetic but one which isn’t just skin deep – it actually impacts how the user interacts with the platform. On top of this, Lollipop has way more support for sophisticated technology and features, including 64-bit system architecture to keep things bang up-to-date.

The big news regarding Android Lollipop is the fresh look, dubbed “Material” by Google. While there are some similarities between Material and the look of “stock” Android Kit Kat, the designers at Mountain View are clearly forging a new path here, in purely aesthetic terms.
The flatness seen in Kit Kat is still present and correct, but it comes with a twist: realism. The animation is going to play a big part in the new design, and Android Lollipop will adopt real-time shadows to give its interface more depth and make it look a little more dynamic. The shadows are there because Android Lollipop will make much more use of layers in the UI, allowing developers to do all kinds of visual customization within their apps.
Another big change is that the famous Android “soft” buttons have been given a facelift, and look even more stylish than before – even if they do call to mind the symbols we used to see on our old VCR players. Android Lollipop is clearly an update on the existing Kit Kat style, but Google is embellishing it with new visual tricks to make things even more alluring. From what we’ve seen, it strikes us as a massive improvement over the often flat and uninspiring Android 4.4.

Project Butter was Google’s way of making Android feel smoother and slicker, and now the company has revealed Project Volta – a system which will provide developers with a better means of determining what elements of their apps are draining the battery at an unnecessary rate. Because Volta will open up the battery stats to dews, they can tinker with their code to make apps more efficient and spot potential problem areas.

Android Lollipop will also take a leaf out of HTC and Samsung’s books by coming with a battery saving mode by default. This will help users get as much mileage out of each charge as possible by throttling certain functions when the juice is low. Such improvements will ensure that Android L is leaps and bounds ahead of Kit Kat, at least on most devices, which only offers the most basic stats on what process is gobbling up the most power.

Notifications have been Android’s strong suit since day one, and Google is making them even better in Android Lollipop. The big change here is that they’re being integrated into the lock screen – something Google previously experimented with when it developed lock screen widgets which allowed you to view emails and events without actually unlocking your phone.
As well as making notifications the first thing you see when you pick up your handset, Google is working on making them smarter when the phone is in active use. For example, in Kit Kat, a call would totally interrupt whatever activity you were involved in, be it reading a book, browse your emails or play a game. In Android Lollipop, events such as these will pop up at the top of the screen, a la Samsung’s Galaxy S5, meaning you can choose to jump to that event or ignore it with a quick tap without leaving your current task.

Compared to Android 4.4, notifications are going to be smarter, more intuitive and less intrusive than before. Kit Kat’s notifications system is decent enough, but it was basically recycling what had come before, so it’s good to see some out-of-the-box thinking from Google in this respect.