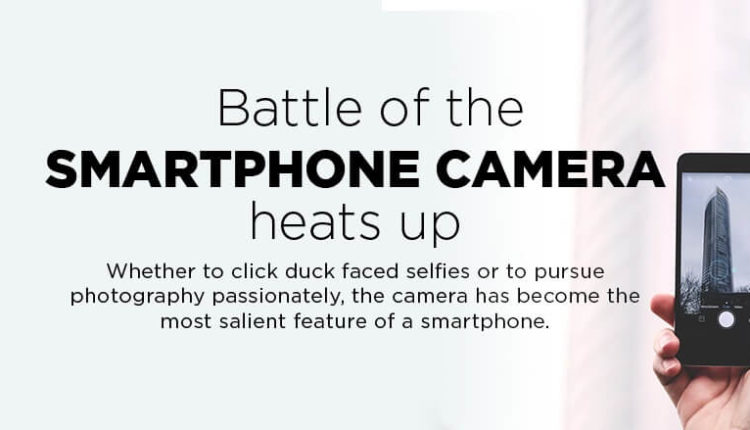 Battle of the Smartphone Camera Heats Up [Infographic]

Smartphones have become a necessity today. When you ask people for what they look for in a camera, camera tops the list. A smartphone’s camera alone can be a deciding factor when it comes to buying a new phone. Everyone looks for various requirements when getting a new phone. We see for a good quality camera, an excellent battery life, good build quality and much more.

Lately there has been a fierce battle among the top smartphones across the globe over getting the best camera performance. Every company is working hard to make the best camera for their phones. There are a lot of things which matter in a camera like the maker of the lens, the megapixels of the camera and also the aperture as less the number of aperture, more light the lens will absorb and thus better picture.

The variety that the market offers is huge. For people who like to capture stunning shots in the first go, for them Apple’s iPhone 8 is the perfect phone. You get a great quality sensor and there is a latest feature as per which every picture now clicked by Apple’s phone will be in HDR by default. This is a very important feature as it means from now, every picture will be clicked in HDR. It’s a great phone with iOS and also a great camera.

If you are someone who likes to have a great stock android experience merged with a quality camera then you should go for Google Pixel. It is Google’s flagship device and Google has got everything near to perfect in this phone.

Many of us also love to capture stunning dim light photos but not every phone can capture photos in low light. For such use case, you better go for Samsung Galaxy Note 8. It’s a great phone with a solid build quality. Samsung has been striving towards making the Galaxy Note 8 stand out and they keep making it better.

We all know the trend of dual lens cameras. These days almost every brand is coming with a dual lens camera phone. It helps in capturing great photos which look like captured from a DSLR. The latest smartphone by google also called the Pixel 2 is another stunning phone with a great camera. It has features like advanced OIS(optical image stabilization) and many more interesting features. It is one of the few smartphones which has a score of 98 as per the DxO rating.

HTC latest device, U11 is phone that has been in the news since some time. It has a lot of a unique features like the squeeze feature which triggers action inside the phone upon squeezing on the sides. The phone has a solid build quality and makes for a great smartphone. For the last option, we will suggest the latest offering by Huawei called the Mate 10 pro. It’s a phone with dual lens that captures stunning photos and also clicks pictures in portrait mode. Everyone has a different flavour when it comes to choosing a smartphone with a better camera. Go ahead and see for a phone that matches your taste and go for it.

Android Auto and its Apps – Must Know