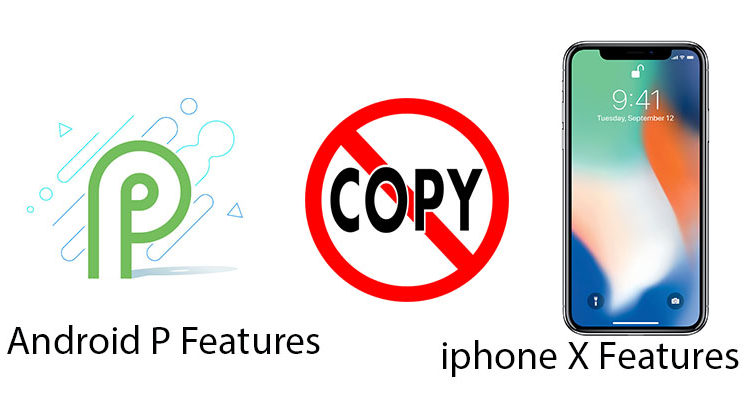 Recently, the next version of Android comes with some of the new features(Android P Features) that are about to make the different appearance in the market. This is actually an Android P at Google I/O 2018.

Google announced the second developer preview for Android P which is upcoming next version of Android. I want to show you five  Android P Features that looked like they were pretty much directly copied from iOS. Some are nearly identical and some are pretty close.

Now the first thing is that there are new gestures of an Android P which look and function pretty much identical to how they function on the iPhone 10 running iOS 11. Although instead swiping up to exit an application, you just tap on a little bar at the bottom. There are also the number of other things you can do with this bar as well if you swipe up and pause, you go to the new version of the of the app switcher. I believe that this may be called the dashboard. An Android P works just like the iOS 11 app switcher, you swipe up on an application to close it or you can swipe over and then down or tap to actually enter another application because this is a developer beta. Obviously, the animations are not perfect yet. It’s also this other gesture where you can swipe from left to right on the home bar and swipe through multitasking.

Just like this, here is another interesting one which is a little bit different than the iPhone 10. The iPhone 10 does not have swipe and hold like functionality that we’re seeing on Android P and it looks pretty cool. This is something that I think could be beneficial on the iPhone 10 in the future but there is no question that although Google says that they were working on these features for a long time. The gesture control and Android P took some heavy inspiration from the gesture controls in iOS 11 on the iPhone 10.

Next up there’s a new screenshot tool if I go ahead and take a screenshot very quickly on the pixel and continue to hold down then a notification will pop up and it says share, edit and delete at the very top of your screen. If you tap on edit then you get a markup view exactly like it was introduced with iOS 11. You can draw on it and you can highlight things, also you can change the colors and make the things undo or redo depending on you.

We head over to notification at the very top where you get a control center like looking set of toggles. Now it is an identity because control center toggles on iOS tend to animate which is really pretty and they also have different colors other than blue as well depending upon what toggle you are tapping on an Android beat they look similar but they all turn blue and none of them do special animation.

Whenever you have text right here in the past you’d have to just kind of guess wherever the cursor was going to be on an Android on iOS forever we’ve had the little text magnifier that shows you exactly where your finger and therefore the cursor is so on Android now and pretty much any text field in the opera system. You can take your finger and drag and you will notice that when you take that blue line on the bottom of the blue selector, it looks just like a dozen iOS where the cursor is and magnifies the text so that you can see exactly what you want to do rather than your finger covering it.

These are the new features(Android P Features) that looks like they too heavy inspiration from or directly copied iOS 11 but of course, this is a two-way street Google and Apple do the same things to each other every year

If you like this article do visit our site here techieswag.com